What don’t I want to learn more about… really?

“Any fool can know. The point is to understand.”
~ Albert Einstein

Did I pay it forward? 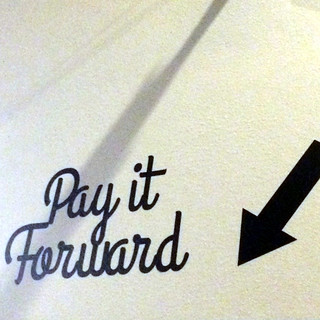 I live in a constant state of indebtedness to the idea of paying it forward.

But I don’t under pay or over pay it forward. This is to an idea of an eye for an eye and a tooth for a tooth… when giving back, in the sense of paying it forward there is a sacred element, like  a calling to a higher duty. This concept makes my newly atheist self completely lost, but it is like a contract with my fellow humans.

I think I need to re-evaluate how I do it, I think I have been giving it back all wrong.

The other day my husband was very upset about someone complaining about Mother Teresa.  I told him that not everyone can see the blessing through the tarnish. Teresa herself struggled with hearing God.  Unlike me, she kept trying to listen. But, I am not sure God or a higher power in a deity sense has to be mandatory to the equation.

I have benefit greatly from those time when people have given to me, so I try to give to others.

“Every once in a while try to do something nice for somebody you don’t know, even if it’s just leaving an opening in traffic for them to merge into, small things like that give people hope that we’re not all assholes.”
~ Joshua Neik

What was the highest point of my day in the last twenty-four hours?

I think I enjoyed having an early dinner with my mother and nephews. Of course my household was there!  I wish I were one of those cancer people who counted every blessing and was delighted at every moment because it could be my last and all that other fucking bullshit. The truth is, this living shit is hard. There are moments when I wish it would stop, when the times it feel glorious are just not seeming to be worth it.  Then I look at my kid and it does, but it is mixed in with the knowledge that he is going to experience life very similarly.

Please, I do not want to die… it isn’t that. But this life thing can feel kind of pointless. I revisited the whole thing with my mother and aunt today. I am so glad I am not as angry as I was, though I feel detached from them now.  and there is even a sense of detachment from that detachment. I evolved in to a keen observer of life and have found it wanting…

except in those moments when things make me feel happy and there isn’t issues with money or sides or time or effort. Hmm, my biggest buzz kill seems like it is people getting their panties all in a bunch.

“My peak? Would I even have one? I hardly had had anything you could call a life. A few ripples. some rises and falls. But that’s it. Almost nothing. Nothing born of nothing. I’d loved and been loved, but I had nothing to show. It was a singularly plain, featureless landscape. I felt like I was in a video game. A surrogate Pacman, crunching blindly through a labyrinth of dotted lines. The only certainty was my death.”
~ Haruki Murakami