I loved books as a child – my parents had a library with bookshelves to the ceiling and a fireplace and a nice rug… it was where my brother and I went after our bath-time to dry off in front of the fireplace and talk with our parents before bed.

There was a bookstore that we frequented (libraries were not all that common in Ecuador in those days) and the owner would let me sit in an equally cozy room with a beehive fireplace on a comfortable chair. To appease the expatriate crowd the bookstore owner, Heinrich, would order books in all kinds of languages. It was where the adult artist intellectuals would gather and talk and their children would huddle and read while they waited. I found all of my early favorite books here.

One of the people we met here was a man by the name of Moritz Thomsen. He was an author, a writer… he and my mother became friends and she would often take us to visit him. My brother and I wrecking havoc on the streets of Quito near his house while they pondered life’s more esoteric questions. I loved Moritz, I consider him to have been family. He put up with us as much as we had to put up with him.  I even asked him to marry my widowed grandmother over a nice sushi dinner once. 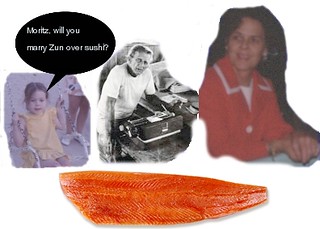 There is a story about Moritz here, I should write more about what this picture is about though.

So I suppose it was my life that influenced me the most. Moritz told me to read voraciously, especially authors I liked. He loved authors like Wallace Stegner. He knew Paul Theroux, though Moritz’s last words about him to us were not all that kind.

I suppose another influence might be my great grandfather on my maternal line, he was a poet. He wrote beautiful poetry and had beautiful handwriting, There are also my mother and my aunt, they tell stories too… my mother through her writing (wish she did more) and my aunt through her art. My friend Bill writes too, and I suppose he was also a part of what influenced me to start picking up my pen again.

Today my blog hat tip goes to Christina over at Palace of Twelve Pillars. I was immediately charmed by the picture of a dark haired girl in a peter pan collar riding a purple dragon. I read through her post and saw that we both have a certain fondness for YA and children’s literature. I felt my heart thaw just a little.