One of the things I am rarely without is a necklace. I never take off the gold chain with the tumi charm. Though I often wear what is apparently called a statement necklace I have added another necklace that has somehow manged to capture my intention in wearing it at all times.

The tumi charm was a gift from some family and friends in Ecuador, when they gave it to me they said that I had shown that I was a native daughter to the land and that as an Incan surgical tool it represented my studies in medicine. It is a treasured gift and I don’t take it off unless absolutely necessary.

The new piece that I seem to wear almost constantly is a piece I bought in a monastery gift shop. It was hidden away on a bottom shelf in a basket under which was hidden a small 3×5 card with some terrible pictures of beautiful round-faced African women on one side and some pencil drawings and crude information on the other, It implied that the necklaces contained in the basket were hand made ceramic beads at a woman’s cooperative in Africa that used local clays. It gave no mention of where in Africa, but the necklaces were amazing with these tiny round beads with occasional longer beads. As the daughter of a woman that traversed the terrains of Latin America in search of exquisite hand crafts I was intrigued and the necklace was only $5.00. So, I picked through them and found one that seemed a little different from the rest.

The purchase was made (thank you, mom) the necklace slipped into a paper bag and forgotten until the trip was over. Once I opened the bad with the necklace a month or so later I was still struck by how magnificent the small handmade beads were. I twisted open the barrel closure and put the necklace on.  I had no idea what magnificence I was yet to see.

When I woke up the next morning with the necklace still on, I was brushing my teeth when I was stunned by the transformation that necklace had gone through in the 24 hours since I had put it on. The obviously clay beads had picked up a beautiful sheen from the natural oils in my skin and had become this incredibly rich mix of colors, with a patina that was mind-blowing. I set my toothbrush down and touched the beads as I look at them int eh reflection in the mirror. The beads were beautiful and I was struck by the memory of the highly pixelated pictures in my recollections of the 3×5 informational card that was with them in that monastery gift shop.

Several weeks later I had need to take it off for a formal event. And I set it on the tray on the dresser in my bathroom. When I went noticed it the next morning I was struck again by how much it had changed, It had returned to a far less beautiful version of themselves. It was obvious they were meant to be worn, to go through a transformation that spoke to so many layers of humanity. They have become a reminder that we are all beautiful, but something comes out that makes us magical when we are  doing what we need to do with others. They have become about community and have somehow manged to tie me to a landmass that I have not properly visited, and hope to someday. 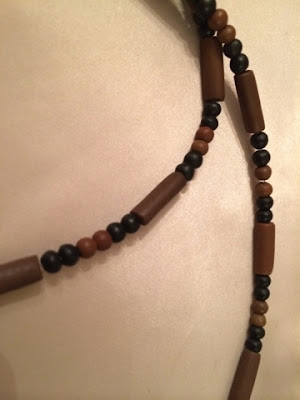