I miss my Squink.
While I am not ripping my hair out and crying all the time. I miss his smell, even his stinky feet. In a home with children (or with a love of nieces and nephews and such) there is something that can happen… these reminders of children seem to be everywhere, and I mean everywhere. A bath toy on the tub, pictures on the fridge, their special plates and cups. The other morning I opened my fridge and saw the family line he had drawn as a part of a cub scout project.
To know me is to know that I deeply value my family and can recite my ancestors (on my mothers side) back to 6 or 7 generations.
My mother has this thing she said when I was a teen (and making poor choices (like staying up too late and taking un-necessary risks)  that essentially boiled down to this;
Back to the beginning of time my ancestors made choices to bring up a defenseless infant. Those choices all helped raise that child, through famine, through war, through strife, in times of hunger… and I have the power to destroy that all with just one poor choice.
Poop!
Anyway, when what she was saying hit me, it was pretty life changing. Not that I was bad, but being buddies with the schools biggest LSD dealer (never did that though, cross my heart mom) was probably not in my best interest and not in the interest of the six children I wanted to have to have a mom like that.
So, it piqued my interest. Most of my maternal side came to Arizona before statehood. They settled this land and if you have every really been in this desert, it really isn’t all that friendly to folks that don’t get how it works.
So, I learned about the Pennsylvania socialite who married a physician and traveled with a chaperon by stage-coach to visit a young physician that worked with the tribes.
I learned about that physician who learned the languages of all the tribes he worked with and translated for them and even advocated to US congress on their behalf for water rights after the building of Roosevelt dam.
I learned how his daughter, Dorajean, became one of the first school teachers in the town I live in now.
His grandson, my grandfather, would go to work on our Arizona mines, as well as build our bridges and and dam (including being held in the US to work on building Boulder Dam, instead of being sent to WWII – turns out he was colorblind anyway).
His great granddaughter, my mom, would travel the world and raise two children while just being awesome (she learned how to trick ride with the Ecuadorean Army and is an learned welder).
All of that is just so rich to me.
So it was a delight to see that my son had picked up most of my stories about his Arizona heritage and was able to complete most of this family tree… using their nicknames for the most part. He just couldn’t remember where the coctor was  (it is C.H. below). 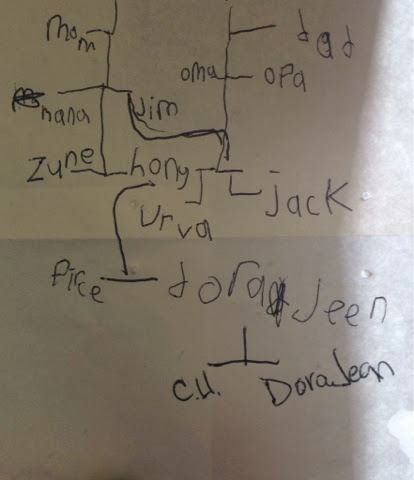