For no apparent reason while in line at In-n-Out:

Squink: “Mama, do you want to know how to be beautiful?”

Squink: “With hairspray. But if you spray it on your body you'll be
frozen”.

That would be about the Sudan.

I have never been there, I am not that familiar with their cuisine, I know some of the basic customs, and I know a few of its former citizens and well… that is about it.

I became completely invested in its future.. at least as much as this Colombian-American girl living in the southwestern US can get when I met one person from there. He was a lost boy, you know one of those Lost Boys of Sudan. He has moved away, and I don’t get to see him as regularly as I did before… but he had a story that moves me to tears even when I think about it…

and walked (OK, I know you get the picture). That song was Jesus loves me… and so he sang that song to himself, he said… to help him feel less lonely.

Now, I don’t presume that it is a great tale about the power of religion. I am a mere mortal and can only say that I am humbled by that story. It makes me ask myself what I would be doing if I were in that situation. If my family had been brutally murdered, if I had no destination to go to but knew I had to move least the same people that killed my family kill me… I think I too would sing a song about someone loving me, even if I had no concept of who that person was.

Click here to see some pictures of Sudan and about their first election and what prompted this post.

Attempt #4 or I’m starting to think I drink way too many soft drinks., originally uploaded by Blair Necessities.
~ Sent from Blair’s iPhone

(btw – SQOTD means “Squinky quote of the day, checked search keywords
on the blog and saw that 8 folks had searched “what does SQOTD mean”)

I love orange, a lot. So when I found a blog called How about orange. . . I thought I had found a long lost friend. Really, considering how most people loathe the color is it any wonder?

And it so when I opened my feed reader and read, I was struck by this post about paper roses from straws.

I thought it was indeed a good idea, to make something little and insignificant yet pretty and beguiling. So, I decided to try and teach myself to make paper roses each time I came across a straw with a paper wrapper.

I did not watch the tutorial, but I did look at the picture to try and understand how to do it… and here are my first three attempts… (btw below are close ups of my original pictures) 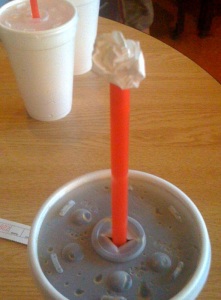 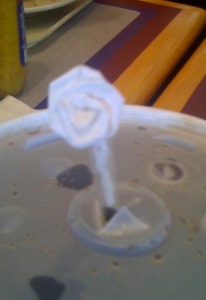 The Man From Snowy River

I was about 13 when my father took me to see this movie for the first time. He spoke about how it had one of the best horse back riding scenes in it that he had ever seen. Boy was he right!

I grew up as a weekend rancher girl, had my own horse and rode rather well… I think was on a horse alone starting when I was about 5.

My mother rode horses too, she was good and as a matter of fact I think I realized I had a really cool mom when she took me to a trick riding class she took and I got to see her ride a horse in all sorts of fabulous ways.

Needless to say, I love horses. I always have… I always will. And am rather proud I still have a good seat even though I rarely get to ride them.

So, when my father took me to this movie… I was caught up in the cheesy love story… remember I was 13… until one point… when the lead character rides down a rather steep mountain side. I got chills watching that 30 second or so scene. I know what it is like to ride a horse both up and down hills and mountain sides.. the steeper they are the more concentration is required. It can be tough. I rode my horses on the Andean mountains… I get those steep hills.

But in that scene, the lead character just takes his horse bounding down the side of the mountain, he stays seated, leaning back, hand gripping the reigns… and my breath stopped then… and stops each and every time I see it. It is probably one of the most magnificent scenes of horsemanship I have ever seen, and as such, the movie remains a favourite to this day.. for that 30 or so second scene.

Here is a link to that scene… key in at about 2:20 if you haven’t seen it before.. and give it about 40 seconds and go full screen.

It is about 90 degrees out…

Squink: “I need a sweater. The kind that makes you stop sweating. For
when the sun is out and you look out the window.”

“Today is a no school day because it's nice Friday.”